It’s summer in Sydney. Christmas was exciting, New Year’s was a blast, and then there was the Sydney Festival to infuse a dash of culture into our lives. We rejoiced as a nation for Australia Day, and now it’s time to celebrate again with our friends of Asian heritage, as their most significant time of the year is upon them. Lunar New Year signals a coming together of families across Asia, with clean houses, new clothes and the customary visits to family to indulge in Lo Hei Yu Shung. We are fortunate that councils across Sydney arrange a host of activities. It’s the food that always piques my curiosity, and the Lunar Markets deserve a couple of visits. The Lunar Markets run from from Jan 27 through to Feb 5, just outside The Star Casino complex. There’s no shortage of food stalls, many with a predominant Asian flavour. Of course, if you have a hankering for a pizza, there’s a pizza food truck, but with all the delicious Asian food, especially a couple of pop-ups by Luke Nguyen and Teage Ezard, you would be mad to miss out! Starting off is a visit to Gingergirl. Brainchild of Teage Ezard, of hatted fame with restaurants in Sydney and Melbourne, the food of this pop-up pays homage to hawker style food commonly found throughout south east Asia. With two of the Coco & Vine team on hand, and little Coco & Viner Sammi contributing to the eating effort, we sample all three items of Gingergirl’s menu. First up are the prawn dumplings, served on a bed of bean sprouts, with three plump dumplings, and peanut soy dipping sauce. The prawn flavour is prominent, the filling is moist and chunky. The casing is soft to bite through, yet holds the seafood filling superbly. I love the ginger that adds a touch of spice, but for a real injection of heat, the dipping peanut soy sauce comes to the fore. Salty and spicy, it’s perfect with the dumplings. My choice is the cold noodle salad. While the dumplings may have been a trip to China, the cold noodle salad is a trip to Thailand. With coriander, basil, red onion, fish sauce, chilli, and lime juice as supporting actors to the superb drunken chicken. It’s tender and flavourful, taking in the Thai-flavoured dressing. The squid is a contrasting, and delightful, textural addition. It’s a fresh and zesty salad with a touch of heat, yet oozing with flavour.

Riding shotgun for this review, fellow Coco & Viner Steve, is speechless as he consumes the Gingergirl chicken ribs. These insanely tasty salt and peppered morsels of tender chicken on the bone are coated in a slightly spicy and superbly tangy tamarind sauce. From the way Steve hoovered them up, it might be wise to order a few rounds of these beauties before they run out! One night is not enough at the Lunar Markets! So with the wife, and Coco and Viner, Mavis back from stateside, we indulge in another night of delicious food. My first stop is Yang and Co to sample a fascinating fusion dish named chicken rice burrito. We’ve always loved the quality of food from Yang & Co. We remember first encountering their delicious Malaysian inspired yumminess near Marrickville, and ever since, we are always on the lookout to see where they pop up. Firstly, kudos to how the burrito is packed. I am able to consume my entire burrito without spilling a thing…very cool! It’s a burrito with layers of flavour; from the rice to the chicken, and superb chilli sauce which, for me, is the most important ingredient of a good chicken rice. It’s a fusion dish that works insanely well. A good test is to hand the burrito over to the wife. You see, Mavis grew up eating chicken rice made by her grandmother; it’s a tradition that their reunion dinner during Lunar New Year, has grandma’s chicken rice as a focal point. She gives a nod of approval as she chews through her bite. With mouth now empty she effuses praise to how delicious it is! Mavis comes back with not one but two dishes (well actually it was three, but I missed grabbing a photo of one!) from Luke Nguyen’s Street Food. A striking dish is the smashed fried chicken. The chicken was generously seasoned, then deep fried until it was nice and crispy on the outside, and tender on the inside. It was then smothered in a layer of sambal sauce. The sauce had the right amount of spice but not too much heat, which makes the perfect dish for someone who usually loves the taste of sambal, but can’t take the chilli heat. To balance out the dish, it comes with a serve of cabbage and rice to mop up all the saucy goodness. I am impressed with the generosity of the Maryland piece, and with the cooking of the meat on the bone, it guarantees maximum flavour. A staple of Vietnamese cuisine is prawn sugarcane, and Luke Nguyen’s version steps it up with prawn mousse and crab-meat. Each serving comes with two crumbed patties, wrapped round a stick of sugarcane, and fried to a nice, golden brown hue. Despite it being deep fried, it was still nice and moist on the inside. Served with a sweet chilli sauce, and sitting on a leaf of lettuce, it was finger licking good! With our savoury tummies satisfied with some of the best street inspired food in the city, we duck into Martin Place to sample and see what Gelato Messina have come up with for this Lunar New Year. True to form, they continue to innovate, and for Lunar New Year have launched gelato cookie sandwiches. Choosing your sandwich is a three-step process. Firstly, choose the cookie comprising of three options of lucky red and gold macaron, coconut palmier puff, or peanut cookie. Next up, choose a gelato; again there are three options of coconut sorbet, salted palm sugar gelato, or thai milk tea gelato. Finally, choose one of three sauces which include mango ganache, kaya (pandan custard), or sweet satay.

Being Lunar New Year I can’t go past the red and gold macaron, with Thai milk tea, and a mango ganache. The macaron is a striking red, with a soft, spongy texture. The ice cream is the familiar milk tea flavour; sweet and creamy. The mango ganache really adds that tropical punch of flavour, and with the gelato, is pure dessert bliss. It’s so summery and delicious, Gelato Messina scores a touchdown with this combination. END_OF_DOCUMENT_TOKEN_TO_BE_REPLACED

In Short: Saturdays NYC in Osaka blends an elegantly restrained aesthetic with a fashion vibe and a typically modern Japanese approach to contemporary coffee culture. Go for the coffee and funky space, stay for the fashion and urban street vibes. Osaka is becoming a destination for specialty coffee geeks the world over. Actually, Japan as…

END_OF_DOCUMENT_TOKEN_TO_BE_REPLACED 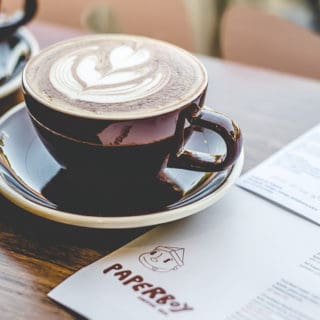