In Short: Sharon Kwan Kitchen exhibits that Portugese chicken is not the only choice for chicken in Petersham. Come in for her Asian marinated flame grilled chicken and stay on for some of Sydney’s best Char Kwei Teow.

My dad makes regular visits to Sydney. Spending time with his grandchild is top of the list, but not far behind is being able to indulge in Malaysian or Indian food which sits a few levels above  what is offered in Canberra. It’s the accessibility, value, and sheer choice that makes Sydney one of the best places anywhere in the country for Asian cuisine. We first heard of Sharon Kwan’s cosy space dedicated to Malaysian street food last year and rushed to try it out. It was impressive and authentic, so when my Dad made a request for a lunch destination, her restaurant bubbled up to the top of the list.

Sharon Kwan Kitchen lends itself to popping in, filling up, and filing out. It is also handy for takeaway and one of the standout offerings that is perfect for its portability is Sharon’s flame grilled chicken with Thai or Malaysian marinades. Petersham may be renowned for its Portugese flame grilled chicken, but do not discount Sharon Kwan’s chicken! Its crispy skin with the blended herbs are well balanced, with pleasant levels of heat and flavour. Combine it with the house made Hainanese Chilli Sauce that adds a delicious punch. From the robust chicken to a more finessed offering of Fried Wantons. These little parcels were uniformly folded then deep fried. With a smattering of the chilli sauce, biting into it revealed flavours of the pork. They’re crisp and light and so easy to eat, that we polished off a half dozen in no time at all. While Sharon Kwan Kitchen’s calling card may be her rotisserie grilled chicken, for me, her signature offering is the Char Kwei Teow. From the char of that first mouthful to the last morsel of prawn, not only did I devour it, I reminisced about a packet of char kway teow that I had in Malacca about 15 months earlier. This Malaysian classic rice noodle dish was about as authentic as it gets in Sydney. Perfectly balanced in flavour, expertly fried, and not oily at all. It’s just about perfect! Continuing with quality renditions of Malaysian hawker classics was a Hokkien Noodles or as Sharon likes to refer to, as Hokkien Char. For Malaysian Chinese, a revered dish is their Fried Hokkien Mee. It is hard to recreate, and the best examples can only be found in the country. Interestingly enough, almost every Malaysian dish can be found in its neighbour across the causeway in Singapore. Yet, Hokkien Mee remains elusive, and in Australia, well, even rarer. Finally, we can say that we found at Sharon Kwan Kitchen a dish that gets really, really close to the famed offerings in KL and Penang. The combination of dark soy sauce and oyster sauce slathered over the noddles is just the right consistency. Not too dry, it’s dark, and yet it’s not soupy either which is the failing of many variants I have tried. It’s the use of pork lard which is genius. Generous morsels of pork and chunky prawns add body to a divine dish. If spicy food is not quite your thing, there is always Chicken Vermicelli Soup to the rescue. For ultimate comfort food enthusiasts , this classic starts off with a clear flavourful chicken broth, topped with chicken mince, choy sum, and rice vermicelli noodles. It was little Coco and Viner Sammi’s choice for lunch today and she enjoyed the warm bee hoon swimming in the delicious warm broth. My dad spotted the Nasi Lemak, and it was game over! He had eyes only for this classic Malaysian rice dish. Rice steeped in coconut milk is partnered with sambal in eggplant, fried anchovies, a bowl of beef rendang, and chicken wings. It’s the generosity of the dish that pleases and then digging in it’s the flavours that come to the forefront. A slow cooked beef rendang pairs well with the rich coconut rice while spicy sambal heats things up. There is nice texture along with salty briny hit from the ikan bilis (anchovies). Like the soup, it’s comforting like a big hug, and definitely an essential order at Sharon Kwan Kitchen. Sharon Kwan Kitchen does Malaysian street food with an attention to detail that many in the city would gloss over. Her meticulous approach to each dish aims to create an authenticity that was appreciated by this table of ex-Malaysians.

END_OF_DOCUMENT_TOKEN_TO_BE_REPLACED 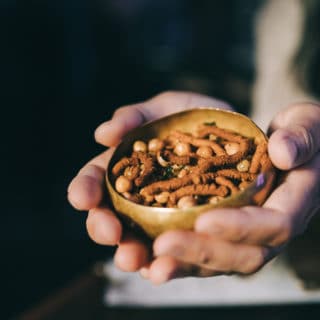 In Short: Lankan Filling Station is leading the pack, as Sri Lankan cuisine really hits its stride across Sydney. Rock up, line up, and get yourself a few hoppers and brace yourself for a flavour explosion from the curries.  When I started thinking about writing this post, I was interested in the back story of…