In Short: The very best pho in Sydney, and a selection of Vietnamese congees and rice dishes

So you’re looking for a destination for an intimate first date? How about the perfect diner to pop the question? Or an escape for that date night without the kids? Sorry to have to disappoint you, but Pho Tau Bay isn’t exactly the venue for those occasions. Pho Tau Bay is where you come for some of the best Pho, not just in Sydney or even Australia, I am thinking this could be some of the best pho outside of Vietnam. This little restaurant in Cabramatta is all about that conveyor belt of soups and rice dishes. Food is served fast, there’s very little pomp or sense of occasion. It’s noisy, but in a celebratory kind of way, but then the whole Cabramatta dining precinct is that way, especially on Saturday morning. It’s a full on assault on the senses, and that’s the reason we love coming to the area. Pho Tau Bay is ostensibly about Pho, a Vietnamese soup that is roughly a century old. If you’re not into big bowls of delicious soup (how could you not be?) there’s rice dishes with chicken, beef, seafood and pork options. Before our ping hot bowls of goodness, we launch into a couple sticks of dau chao quay or fried bread sticks. For our Chinese friends, you would know this as it youtiao. It’s certainly a breakfast favourite across Asia, a little naughty, but a whole lot of delicious. In our travels to Taiwan or Singapore, we usually have it with soy milk. It’s crispy on the outside and airy, and soft on the inside. If you order soy milk, it’s perfect when dunked into it. I save some for my Pho and it’s just as good when immersed into the flavoursome broth for just a second. 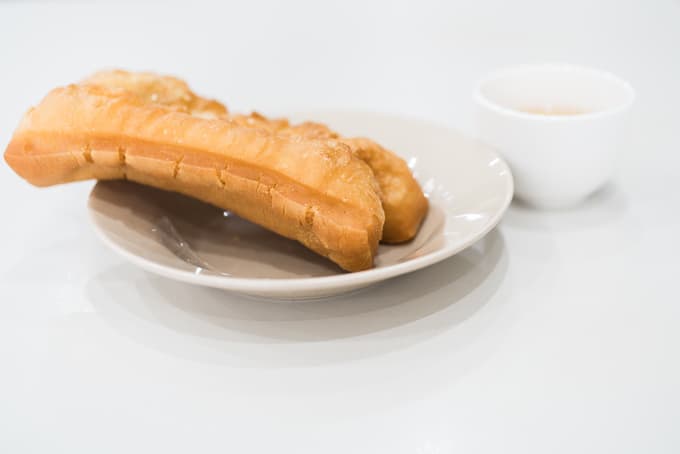 Half way through our fried bread sticks, my bowl of Pho arrives. I have ordered the Pho bo dac biet(Pho with rare beef, beef brisket, beef balls, bible trip and tendon). Basically, it’s Pho with the lot! Back in 2012, this dish made it into the list of Sydney’s 20 iconic dishes. The clear soup is packed with flavour from the stock that’s been painstakingly tended to for hours. Beef bones are the base, and I can detect star anise, pepper, cloves and cinnamon. I can almost assure you there’s a few secret ingredients that make their way into the soup that will require experimentation to get a soup that emulates this amazing soup at Pho Tau Bay. Each cut of beef plays their part. Rare beef is cooked in the hot base, and is tender and so is the beef brisket. Beef balls are springy, yet not too rubbery, as some can get. Tendons are not something I am used to, but are surprisingly easy to consume with their gelatinous consistency and it delivers a rich beef flavour. Tripe is a bit more chewy in nature but really quite delicious. It definitely has been a day of firsts. My Pho is usually restricted to rare beef and beef balls but the additional ingredients do add a layer of depth. Add to that silky ribbons of noodles which marry so well with the beef and soup. Nice touches with blanched bean sprouts and Asian green leafed vegetables round off a memorable bowl of soup. Continuing with the comfort food theme is a chao thit bo(beef congee). Our little one is quite difficult to please, but congee is a dish that she has grown up with, so we rejoice a little when we see congee on the menu at restaurants. Pho Tau Bay’s beef congee is fantastic. I will be the first to admit, congee is often too bland for my liking. The difference here, the julienned slices of ginger and accompanying bowl of chillis. I also love the chunks of beef mince that have been browned and give the dish a delicious texture. A raw egg yolk is cooked by the hot congee mix and binds the dish together nicely. If all congees are like the one found at Pho Tau Bay, I’d be eating congee a whole lot more. If beef isn’t your thing, Pho Tau Bay serves a mean mien ga(shredded chicken and vermicelli).  On the surface, it looks a nice chicken soup with thin noodles, but take a scalloped fillet of chicken with that broth and you will taste a soup with an an immense depth of flavour. Ginger, pepper, and cinnamon are noticeable. The glass noodles are springy and complement the chicken. The chicken itself takes in the flavour of the broth. Each piece is also tender and almost melts in your mouth. To do well in Cabramatta the food has to be sublime. The lines out the front of Pho Tau Bay are testament to its quality. We came away truly impressed with the food and definitely one of the best little cheap eats in Sydney.